The ISM Manufacturing Index fell 0.2 point to a reading of 48.1 in November. However, gold struggles to find momentum. What is going on exactly?

The Institute for Supply Management announced that its index of national factory activity dropped from 48.3 in October to 48.1 last month. The number was below expectations and it also remained below the 50 threshold, indicating contraction – shrinking for the fourth straight month. In other words, the manufacturing sector is still in recession.

We all know that. But what about the future and the broad economy? Well, situation looks better here, as the ISM index remains above the 42.9 level, which is associated with a recession in the broader economy. And the recent improvement in China’s PMIs prompt some to say that the ISM is bouncing along the bottom. Moreover, the strike at General Motors is over, while Boeing hopes to resume deliveries of its 737 MAX.

However, the decline in new orders – the New Orders Index registered 47.2 percent in November, a decrease of 1.9 percentage points from the October reading of 49.1 percent – suggests downside risk, if anything. The fact that Trump restored tariffs on steel and aluminum imports from Brazil and Argentina will not help the domestic manufacturing sector which already is struggling with higher tariffs, trade uncertainty, slowing profit growth and weak overseas demand.

Following shaky economic reports – besides data on manufacturing, the index of pending home sales dropped 1.7 percent, while the personal incomes were flat in October – the Federal Reserve Bank of Atlanta slashed its fourth-quarter GDP estimate from 1.7 to 1.3 percent annualized rate, reviving worries of a slowing domestic economy.

What does it all mean for the gold market? From the fundamental point of view, weaker industrial production should support gold prices. This is because the manufacturing sector’ problems could not only translate into slower economic growth, but also force the Fed to adopt again a more dovish stance  and cut interest rates further in 2020.

But the manufacturing recession failed to spur rally in gold price in the fourth quarter of 2019 (   https://www.gold-eagle.com/rate/price-of-gold/ ), as the chart below shows. The gold prices are clearly struggling to find momentum, even in the face of disturbing data on the U.S. manufacturing sector. 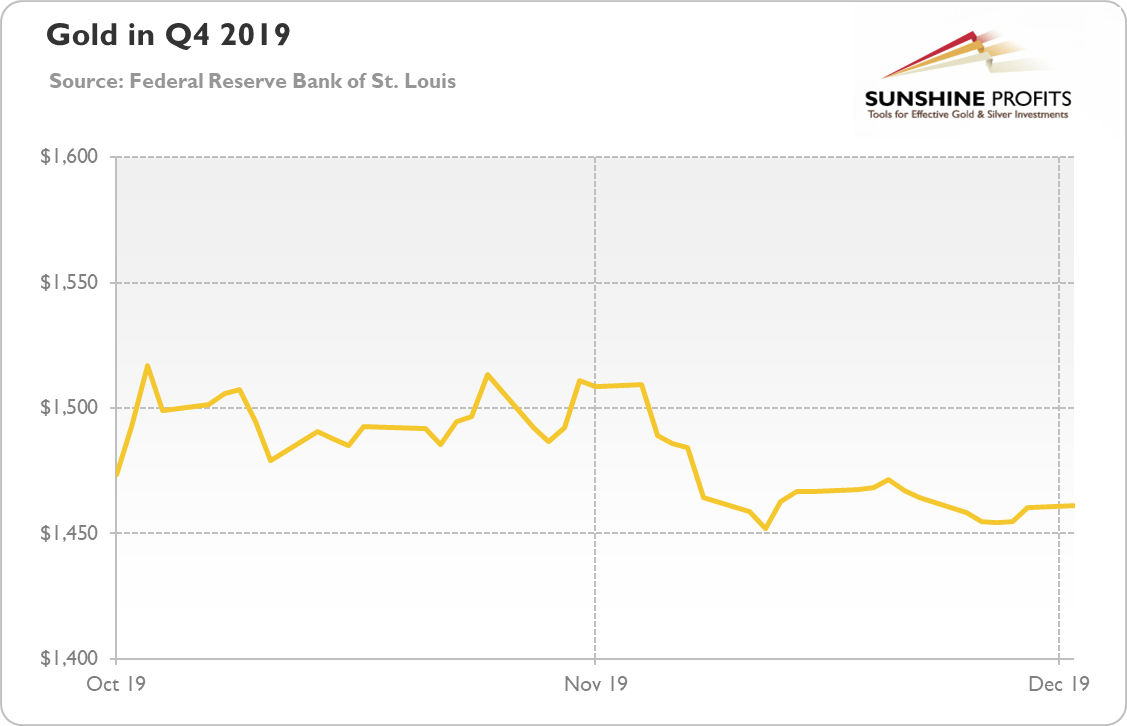 However, other economic data ended up better than expected. Investors also became more optimistic about the trade deal between China and the U.S. So, given where the general stock markets are, gold is actually not doing bad – but the key test will be yellow metal’s behavior in response to the recent greenback’s weakening. Stay tuned!